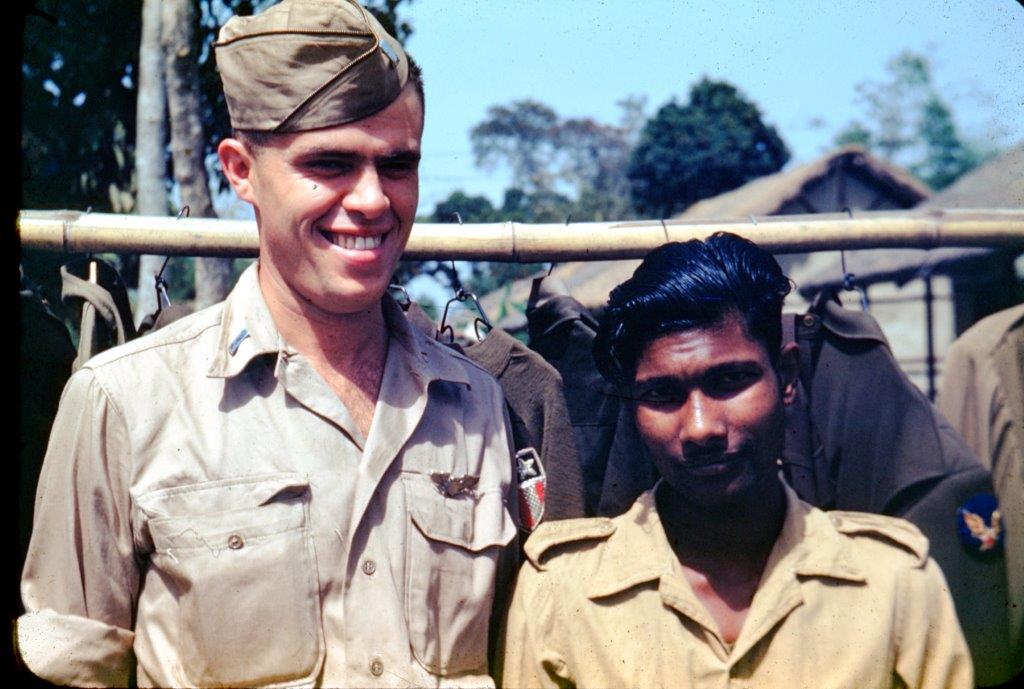 Thank You For Your Love Letters To Mary

My Dad’s relationship with Lt. Roland E. Speckman began in September 1944 at Nashville, TN. They became crew members of a brand new C-87 cargo plane. Dad was the pilot and Roland was the copilot. They spent 21 days flying the plane from the US to Tezpur, India. They made seventeen stops en route to Tezpur. The last remaining stops were in India before their last stop at the Army Air Force Base Unit #1327 in Tezpur. They would live there from October to May, 1945. In December they became basha mates. A basha was a hut that served as living quarters. It could house four men. Their Indian basha servant’s nickname was Jackson (see photo with Roland). Over a period of six months they became friends and remained friends in their hearts. I don’t know that they ever saw each other in person after Dad departed from Tezpur in May 1945. I do know that Roland and his wife Mary sent Dad and Mom a card for their wedding in 1947, sent Christmas cards for a time, and then reconnected in the late 1968-69 when Roland read a piece about Dad’s flight surgeon activities at Nellis Air Force Base at Las Vegas. I have several email exchanges between them from the mid-to late 1990s and after.

Mary kept Roland’s letters from the trip and tour of duty. Roland had them transcribed and privately published in the 1990s. Roland contacted Dad about this project and Dad requested a copy of the volume. Roland mentions Dad many times in the letters to Mary. I discovered Dad’s copy of the volume after he died in April 2014. I was surprised, maybe even shocked, by what I read. I was reading about Dad’s tour of duty through Roland’s letters. I didn’t know this connection to Dad’s assignment in India existed. Reading the letters made me wish I’d asked Dad a zillion more questions about his World War II duty. Don’t get me wrong, I asked Dad questions, but hindsight tells me there were so many more to ask. In any case, the letters helped me connect to this portion of Dad’s war experience.

I searched Roland’s name on the internet and found some contact information. I left a message that was relayed to Roland and his daughter Carol in Fairfield, CA. It’s a small world. Dad had been stationed at Travis Air Force Base in 1963-64 and we lived in Fairfield on East Wyoming Street during this assignment. I called Roland and introduced myself. After this call, I decided to arrange a visit to Fairfield and in August 2014 I met Roland (see photo). I spent the night at his daughter’s house with whom he was living. In the morning I enjoyed a delicious breakfast with Roland, Carol, her husband Richard and one of their sons. We talked about World War II, family, faith and my Dad. Roland signed a permission letter for me to use his material in the book I had started writing about Dad. I wanted it to focus on Dad’s heritage, growing up and war experience. Roland’s material gave me important information for Dad’s time in India.

Roland earned his 650 hours of flying time in India on May 10 after Dad had departed Tezpur. When crew members reached this number of hours they fulfilled their obligation and were sent back to the States. Roland’s letters contain his anticipation and excitement of being reunited with Mary who was serving in Long Beach, CA. They had married on December 15, 1943. He also served in Korea and Vietnam. He retired as a Lt. Colonel from the Air Force in 1972.

My goal was to get a copy of my book in his hands before he passed, but this didn’t happen. Roland died Sunday morning July 24, 2016 following a stroke three months before the book was printed. I’m grateful Roland wrote his love letters and Mary preserved them. I singled him out for these letters on the Dedication page in my book: “I also thank Roland Speckman for giving me permission to use his self-published love letters to his wife Mary from September 1944 to May 1945. They were rich beyond measure and allowed me to connect to the only personal link to my dad’s tour of duty in the China-Burma-India theater of World War II. Roland’s daughter Carol and son-in-law Richard allowed me to meet Roland in their house without them ever having met me in person, and while they were out of town that August night in 2014.” Roland, thank you for your love letters to Mary.