I take my morning walks along the Florida panhandle at Grayton Beach and Blue Mountain Beach. I do it as early as possible to avoid the larger crowds of beach enthusiasts. A friend of mine suggested I take a plastic bag with me and pick up trash while I walked. I started doing that and also started picking up beach toys left by the beach visitors. I call them beach treasures.

I got the crazy idea of creating short short stories with the treasures to post on Facebook. I thought creating these 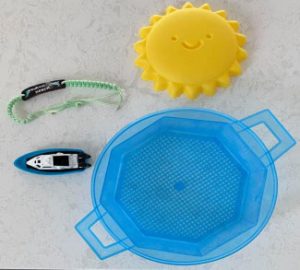 stories might enhance my storytelling and humor. I arranged the treasures on a paper towel back at the house to photograph. I use the photo with the short short story. The reader can see the treasures and read the story.

William Victor, S.L. gives some pointers on short short stories in “How to Write Short Short Stories.”(posted on www.creative-writing-now.com)  He says that something must change between the beginning and the end. The change can be in the character’s situation, the character’s perspective on the situation, or the reading’s understanding of the situation. 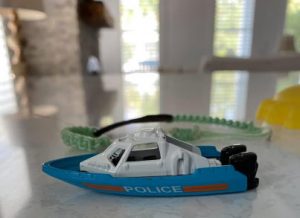 The following two stories are examples of my creative efforts. The first one was my first story posted July 3 and I included two photos to show that the boat was a police boat.

It was a bright sunny morning. The police boat raised it motors as it approached Grayton Beach in Florida. The policewoman onboard had seen me walking on shore. As she called out to me, I stopped to wait as the boat glided into the wet sand. Officer Jean Staples introduced herself and asked me if I could answer a question or two. Lifting up a photo, she asked if I had seen the woman in the photo. I told her that I hadn’t seen her, but that I had found a bracelet like the one the woman in the photo was wearing. I was also carrying a light blue sifter beach toy that was almost completely buried at the water’s edge when I found it. Office Staples then asked me if she could have the bracelet for her investigation, so I gave it to her without any qualms. As she backed the boat away from shore and engaged the outboard motors, she laughed and shouted back to me, “I lost the bracelet yesterday while I was beachcombing. Thank you for finding it for me!”

The second story contains a religious punchline and was posted August 10th:

Ollie Octopus and Sadie Seal were trapped in a net. I rescued them and we sat together in the shallow surf of the Gulf. I told them they were my morning treasures. They asked simultaneously, “Who is your favorite treasure?” I confessed that I had a greater treasure and asked them if they’d like to hear about it in a poem? Again, they both spoke at the same time, “Yes!” I put on my poetry goggles, cleared my throat and began, 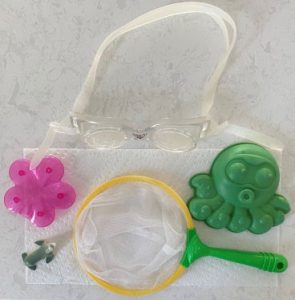 They cried together because they knew God was their best treasure too. They gave me a pink flower.

I’ve been emotionally enriched during the pandemic by creating these  stories. I’ve received many favorable comments on Facebook and many followers look forward to them. You can create your own short short stories. Pick out several objects in your house. Without a whole lot of reflection start a story by adding each object into the story line. See where it leads you. This can be a rewarding ‘game’ with children or at an adult gathering (less than ten people these days, of course).

Jesus was a great storyteller. He used simple things to convey spiritual truths that the listeners were required to discover upon their own reflection. What stories can you create and tell others to encourage, motivate, or comfort them? Be assured, you too can speak through short short stories!