Did Jesus Give Money To the Poor? 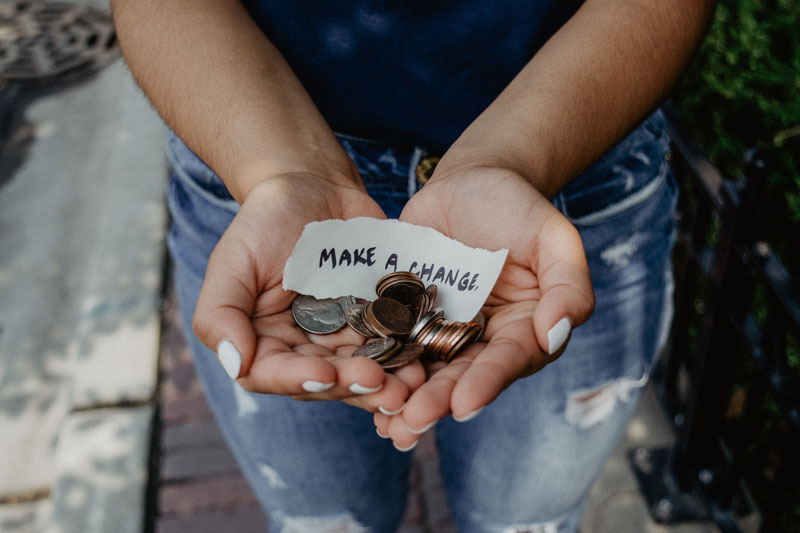 Earlier this year while preparing material for teaching on stewardship, it dawned on me that there is no example in the four New Testament Gospels of Jesus giving money to a poor person. This observation intrigued me and motivated me to investigate it more in-depth. Giving alms was a Jewish custom and Jesus taught about it (Matthew 6:1-4).  Jesus most likely practiced alms giving. John 13:29 states, “Since Judas had charge of the money, some [of the other disciples] thought Jesus was telling him to buy what was needed for the Feast, or to give something to the poor.” This verse shows that Jesus knew of and supported the use of the money for the material needs of his entourage or for alms. Jesus received financial support from his friends. Luke reported that some women “were helping to support them out of their own means.”(Luke 8:3) We don’t have any way of knowing how much these women gave or how frequently. It’s very likely that other people gave financial support to Jesus. He wasn’t wealthy. Matthew recorded Jesus telling an interested person, “Foxes have holes and birds of the air have nests, but the Son of Man has no place to lay his head.” (8:20) Jesus wasn’t wealthy, in fact, he was poor, and as some like to say, he was homeless.

Why isn‘t there an example of Jesus giving money to a poor person? He taught about alms giving, caring for the poor and warned his audiences about the dangers of hoarding wealth. The early church clearly exhibited an impressive commitment to helping those in need, so much so, that subsequent  branches of the church have advocated a communal lifestyle.  Paul taught about serving the weak (Acts 20:35; Galatians 2:10; 6:10; Ephesians  4:28). My question above can be answered by stating that giving money to the poor is a subcategory of the broader topic of stewardship.  Mr. Tom Pryor, author, business owner, teacher and mentor, wrote, “Possibly the reason there is no scripture of Jesus giving money is because he solved the needy’s problem in other ways.” Jesus became poor in his incarnation to make us rich as Paul wrote, “For you know the grace of our Lord Jesus Christ, that though he was rich, yet for your sakes he became poor, so that you through his poverty might become rich.” (2 Corinthians 8:9) Jesus was the steward par excellence because his whole life was given to God and his service. He didn’t have money to give to poor people, and he didn’t have to have money to be a steward. Stewardship is an outlook and lifestyle. It’s one that both rich and poor can embrace.  It’s living in such a way that everything is viewed as belonging to God and we are conduits of everything God gives us. Stewardship is living to serve God’s gain whether one is poor or rich. Paul addressed the matter that it’s not how much one gives, but is the gift given in love (1 Corinthians 13:3), given cheerfully (2 Corinthians 9:7), and given according to one’s means. (2 Corinthians 8:12) Jesus’ being and possessions were wholly devoted to God, even to the point of death on a cross. This is Jesus’ example for you and me to follow.

Another reason we don’t have an example of Jesus giving money to a poor person is that if we did and we knew how much he gave to the person, we could conclude that amount was all we have to give and we’d boast about giving the same amount of money as he gave.  There’s a greater depth to Jesus’ example of giving.  I think the Rev. Dr. Fred Garry said it well in an email to me, “I consider the three great disciplines (alms, fasting, and prayer) as all having the same aim: the secret or mystery of instinct.  Learn to give, to pray, to receive, so the right hand doesn’t know what the left is doing: a matter of instinct.” Usually our giving is calculated and not instinctive. Wemay think that giving is our loss and somebody else’s gain, and it leave us in a vulnerable condition or it is reason to boast that our gift is a means to God’s favor. The result is that the gift becomes more about us than about the God who gives us what we have to give to others (2 Corinthians 9:10). Since we have no  example of Jesus giving a certain amount of money to a poor person we have to take responsibility to assess our God-given assets  in light of God’s generosity and give so that thanks is offered up to God by the giver and recipient ( 2 Corinthians 9:11).

A third reason we don’t have an example of Jesus giving money to a poor person is that Jesus focused on more important matters: attention, interest and friendship. Jesus came to proclaim good news to the poor (Luke 4:18) and he is the good news. Jesus called people to actively follow him so he could train them to be fishers of men. (Mark 1:17) This requires relationships and leads to more relationships. Good, healthy relationships are what we need with people and God. Jesus came to foster both kinds of relationships. I thought about the beggars on the streets in Hyderabad, India when I was there in March. What could Christians do to build relationships with them? An Indian friend said that many of them are just interested in getting money. They aren’t interested in relationships with the giver. One doesn’t have to go to India to find beggars or realize that some of them don’t want relationships with the givers. It’s in relationships that generosity can best be expressed.  We are warned about simply wishing good upon a person in need. Engaging them with attention, interest and friendship  is more Christ-like in helping with their material need (James 2:14-17; 1 John 3:16-18). Jesus gave in many different ways, including laying down his life in death (John 15:13).

I believe Jesus gave money to the poor even though the Gospels don’t record an example of him doing it. I believe that without an explicit example, we better not limit our perception of stewardship to writing a check or giving money to the poor. If we would follow Jesus’ example of being a steward of all that God gave him, then, we must use our time, give out of our treasure and invest our talents to bring the kingdom of God near to others.  Whether rich or poor, there are many ways for us to serve the weak.  God’s joy wells up inside of us when we befriend people in need and lean into their lives with our time, treasure and talents, so the miracle of helping those in need can be multiplied over and over again as if we were serving Jesus himself(Matthew 25:40).