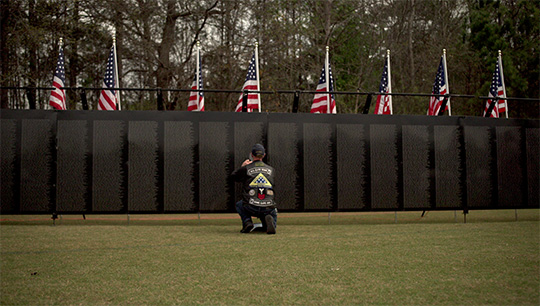 The Wall That Heals in York, Maine

The Wall that Heals is the replica of the Vietnam Memorial in Washington, D.C. It visited York, Maine on Labor Weekend 1998. I was asked to pray and speak at the religious ceremony on Sunday afternoon September 6. The Cape Neddick Baptist Church choir also sang during the ceremony. I sent the prayer and presentation to my Mom and Dad after the ceremony which I include below. I chose a portion of Exodus 15:26 as the text for my presentation, “I am the LORD, who heals you.” Please forgive the grammar and syntax mistakes from 1998.

Invocation: Great Physician and Eternal God, we are here for the appointment with you to seek healing. Your servants have invited us to come to this place to seek healing and for that healing we turn to you. This physical wall represents the heartache as well as the affection experienced and shared by millions of folks—Americans, Australians, Vietnamese, Chinese, Russians, Thai, Cambodians, Laotians and a host of other nationalities, drawn into war for many different reasons. And we are drawn here today for many different reasons, but primarily for spiritual, God-given healing. Thank you for the healing that is taking place right now in the minds, hearts and bodies of this precious crowd. In Jesus’s healing name. Amen.

“Hello, my name is Judson Stone. I’m the pastor the Cape Neddick Baptist Church. I had a high draft number in 1970 and I didn’t volunteer to serve in the military. I was an Air Force brat at the time. (Some people might think I’m still a brat.) My father was an Air Force medical doctor who served at Cam Ranh Bay, Vietnam in 1967-68. Very possibly he tended to someone who is visiting the Wall that Heals today. Needless to say, some of the names on the Vietnam Memorial represent patients my father attempted to save from death after being hit by enemy fire, friendly fire or due to some kind of accident. Why do I rehearse these details? I’m proud of my father, but I’m also thinking about a greater battle that raged at home—my mother trying to parent five sons—four of them teenagers. You know drivers’ licenses, puberty, girls, alcohol and her own need for love and affection. A book entitled “Where Does A Mother Go to Resign?” contains this quote: “The bravest battle that was ever fought, shall I tell you where and when? On the map of the world you will find it not. It was fought by mothers of men.” Whether that is true or not each person must decide for themselves. But this “Wall that Heals” reminds me of the pain and anguish that mother endured and thousands of other mothers and fathers; it reminds me of the thousands of children who were deprived of their fathers, siblings for a period of time or robbed of through death in war.

How have I sought healing? I remember that God is our creator. He created Vets first and foremost as human beings, bearing the image of God. God loves you, not because of your military service, but because you are his handiwork. Because of this conviction, the next element of healing for me is to encourage Vets to talk about their experiences, hoping to convey to them that I care. Finding people who will listen, and your willingness to open up to them, can encourage healing. Finally, flesh and blood are not our greatest enemy. My allegiance is to Jesus the Messiah. He gave his life in a greater war that rages in us—the war against sin, selfishness and Satan. God raised him from the dead. I know that the “Battle-Scarred One” can raise you up from the battlefield of unfulfilled hopes and dreams and put you on the road to healing.

Ask God for healing, trust God for healing, share God’s healing with others. Oh, by the way, if any of you were treated at C. R. Bay with a procedure called “closure under tension” my dad is willing to take your name to see if he still has his operative report of your surgery and share it with you. Another way to be healed. God bless you.”

In my email to Mom and Dad I added, “I’m proud of both of you. It’s meant a lot to me to reflect on those years in our lives. One perspective—mine—which reminds me how much you’d cared about me and my brothers. Hopefully, we can return the favor.” 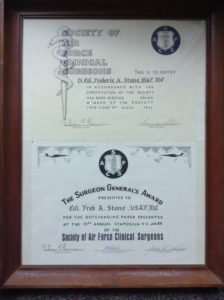 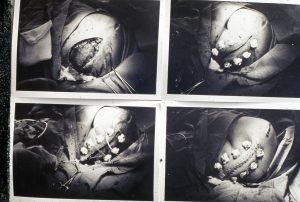 While at Cam Ranh Bay Dad worked on perfecting the ‘closure under tension’ method of closing a wound to minimize the scarring. He made a presentation to the 16th Annual Society of Air Force Clincial Surgeons Symposium June 9-12, 1968 at the Air Force Academy. Dad said, “The report I gave….after coming home, [was] illustrated with motion pictures of soldiers, Marines and Navy Corpsmen…” He earned The Surgeon General’s Award for the presentation. The photo may be repulsive to some, but it shows the ‘closure under tension’ method in four stages.