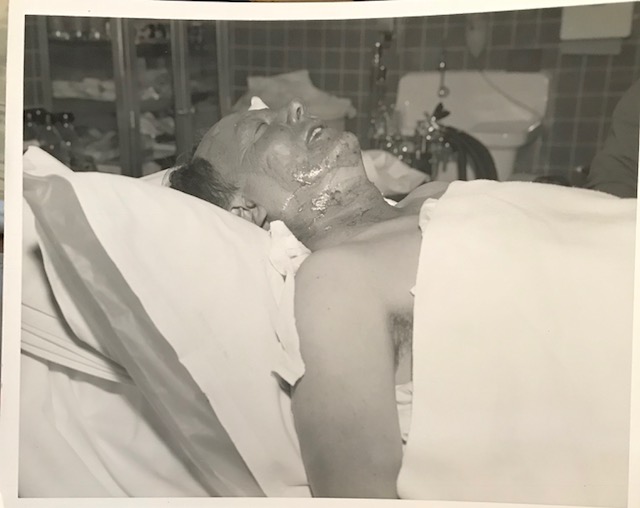 Safety Is No Accident

First Rate, Inc. partners with Homes of Hope that builds houses for the poorest of the poor. Homes of Hope was started in 1991 in Tijuana by Sean and Janet Lambert. One of the sayings on the work site is ‘Safety is no accident.” Well, accidents do happen. On one house build a coworker was hit on the head by a hammer that slid off of the roof. That was an accident. 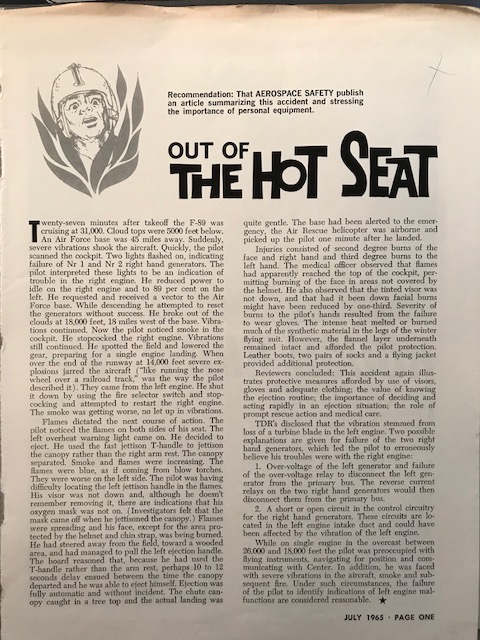 Speaking of accidents, an article was written about an F-89 crash that occurred on October 28, 1964. Our family had recently moved to K. I. Sawyer Air Force Base located south of Marquette, Michigan in the Upper Peninsula. Dad was the new Hospital Commander at the 806th Medical Hospital in mid-October. Dad saved photographs of the pilot who suffered hand burns and some facial burns. The article from the July 1965 edition of Aerospace Safety didn’t mention the name of the pilot or the location of the crash, but by googling F-89 crashes I located both. The pilot reported that severe vibrations occurred after take off. Scanning the cockpit, the pilot noticed that the right-hand generator warning lights were on. He interpreted this as trouble with the right engine and reduced power to idle on the engine and also reduced power to the left engine. He requested a vector back to the airbase. As he descended he tried to reset the hand generators without success. Vibrations continued and he noticed smoke in

the cockpit. He stopcocked the right engine. As he approached the runway, the flames forced him to eject. The investigators said that his visor was not down and that his oxygen mask may have come off during the ejection. He parachuted safely and landed in a tree. The medical officer believed that if the visor had been down, facial burns would have been one-third less severe. The pilot wasn’t wearing his gloves which led to the second-degree burns on his right hand and third-degree burns on his left hand. Leather boots, two pairs of socks and a flying jacket gave additional protection for his lower extremities. The reviewers stated, “This accident again illustrates protective measures afforded by the use of visors, gloves and adequate clothing; the value of knowing the ejection routine; the importance of deciding and acting rapidly in an ejection situation; the role of prompt rescue action and medical care.

The thrust of the article stressed that it’s important to implement and observe safety measures to ensure that accidents when they do occur, would minimize harm to or death of the crew. This sounds like my Dad’s philosophy. He saw enough frostbite cases in northern Michigan winters to make me and my brothers wear boots to school which I hated to do because it didn’t look cool. He taught not to wrap the ski rope around my arm if I was in the motorboat because if I fell overboard the rope could restrict my arm movement and cause a serious accident. He stressed to me as a 16-year old to drive defensively when we lived in Las Vegas and I received my driver’s license. Finally, he always packed safety equipment when he or we traveled. I thought it was overkill, but that didn’t bother him. He was living his philosophy that was highlighted in the article about aircraft safety. The Boy Scouts motto, “Be prepared,” always meant Dad tried to be prepared for the unexpected. He practiced safety procedures and he tried to be prepared for unexpected contingencies that might arise. Safety was no accident to him. The last expression of his commitment to safety might have been when he voluntarily gave up driving after having an auto accident in Pantego, Texas when he was about 89 years old. My concern for his wellbeing and other drivers on the city streets had been growing as he grew older. He made it easy for me and my brothers by halting his driving.

An ancient Jewish law directed the people to erect a parapet on a flat roof to prevent accidental falls (Deuteronomy 22:8). Safety was a physical and spiritual matter since the law’s purpose was to avoid bringing the guilt of bloodshed on the household because of a preventable accident. We can ask ourselves the following questions. What safety precautions did our parents, teachers, coaches, pastors instill in us? Are we practicing them for our own good and the good of others? What safety precautions are important at our places of work? Are we following them? If not, why? Remember, safety is no accident.