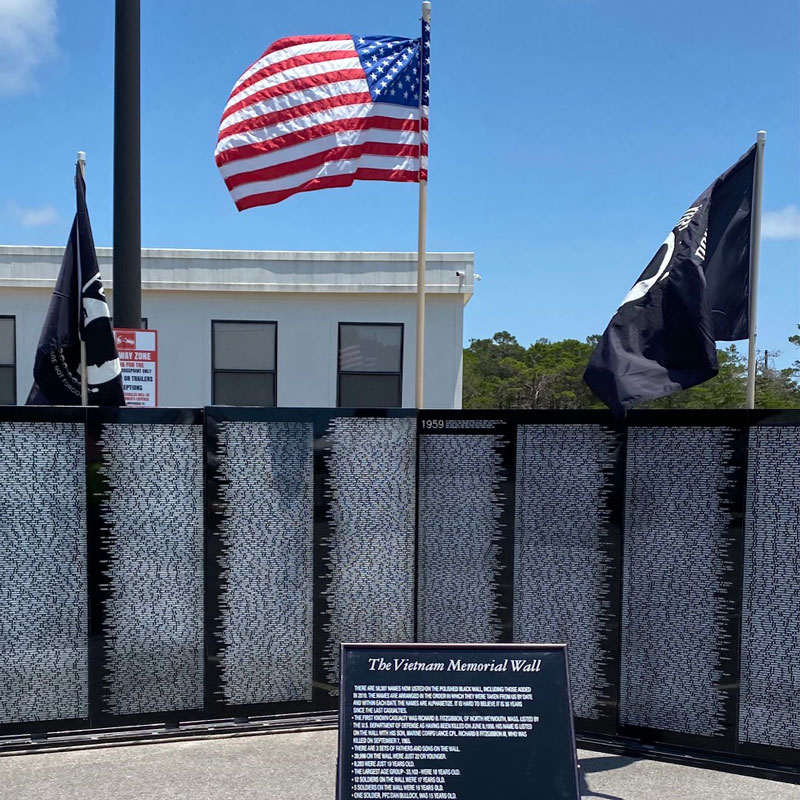 Memorial Weekend 2021 raised my mind and heart to a new level. The Vietnam Traveling Memorial Wall visited Santa Rosa Beach. I joined other people in setting up the Wall and taking it down. The Wall was open to the public 24/7 from Friday until Tuesday morning. My wife and I served together on two four-hour shifts as Wall Monitors.

I served on the last Wall Monitor shift replacing General Philip Breedlove (Ret. USAF) and his wife. The Breedloves are residents of Santa Rosa Beach. He gave a powerful Memorial address at the Monday morning service in the Gulf Cemetery. The large audience honored those who did not return alive from battle.

I heard many stories at the Wall of loved ones, friends, and comrades. Several people, like me, did not know anyone whose name was on the Wall. I told several people that I wondered how many of the names represented people my Dad, Colonel Frederic A. Stone, M.D., tried to save as a surgeon at Cam Ranh Bay in 1967. I will never know the answer. I learned, however, that forty Stones are memorialized on the Wall.

One lady told me that her father was killed in Vietnam, and she has “never gotten over it.” Another lady told me about wearing a POW bracelet for several years. She did not know what became of him. She received news on Saturday that since his name is not in the Directory then he came home alive. This news lifted her spirits. Then she received a website link to find additional information. She told me, “This is the first time I’m leaving the Wall with a smile on my face.”

I found out again that I am an emotional being. Sometimes I found that my emotions prevented me from speaking without first taking a deep breath. I would get choked up. This is not always an easy thing for me to accept, but I am grateful that I had the privilege and honor of assisting many people in finding a name on the Wall.

Here are some of my other reflections on Memorial Day Weekend 2021. First, remove the word ‘Happy’ from your Memorial Day greetings. More than one veteran told me it was not a happy day for them. They grieve for the men and women who did not return alive. ‘Happy’ is a popular culture adjective. I recommend adjectives such as Appreciative, Honorable, Respectful, or Meditative. Changing the adjective will help restore the original purpose of the day.

Second, thank a veteran for their military service before asking any other questions. If they are willing to talk about their service, you will be a much wealthier person for listening to their story. Every person’s story is worth hearing.

Third, talk to people about their family’s military heritage. Many families have a remarkable heritage.

The defense of nations is a role of good governments. Raising up and maintaining strong and effective militaries is costly. War is hard, destructive, cruel, and the maker of widows, orphans, and the homeless. Memorial Day is when we put the spotlight on those who gave their lives to aid a national cause. Memorializing the dead is the way loved ones keep their deceased alive. We have the responsibility to support those who died for our nation and those who grieve.

My pastor reminded me Sunday morning that Jesus Christ memorialized his approaching death. He told his followers to eat the Passover bread as though it was his body and to drink the cup of red wine as though it was his blood for the forgiveness of sins. I did this Sunday morning in the company of others. I also memorialized my Dad as a Vietnam veteran, not because he died there, but because he did all he could to save soldiers, some who did not return alive. They are memorialized on the Vietnam Memorial Wall. We remember those who gave their lives for our country.