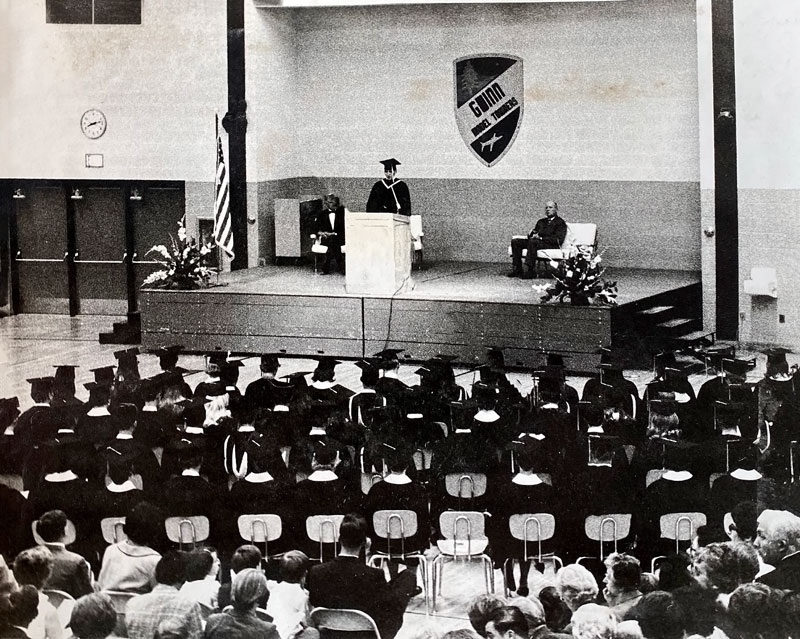 Get Prepared to Be Enlisted as a Speaker

When did you give your first public speech? Nearly fifty years ago I became a public speaker, not a professional one, but as a result of my high school classmates enlisting me to give one of the two graduate addresses in our June 3, 1970 graduation ceremony.

Some people choose to be public speakers and others are enlisted to be a public speaker. I fit the second category.  Fifty years later I’ve reread my speech in light of twenty-six years of preaching experience as a pastor, twelve and a half years as a chaplain, plus five and a half years as a Toastmaster. The purpose of this article is to make some observations about the speech and to give you three ways to prepare yourself when you’re enlisted to deliver a speech.

In reviewing my senior scrapbook many memories came back to mind and many remain buried. I found that some of my memories were incorrect. My memory of the speech title was wrong. I thought the title was “Know Thy Self,” but it was “The Greatest Thing in the World Is to Know How to Be Yourself,” which is a quote from Michel Eyquem Montaigne(1805-1872). I read my diary and found that I worked on the speech more times than I remembered. I typed it two days before the ceremony and practiced it the next day at the school under the watchful eye and discerning ear of my speech teacher.

My June 3rd diary entry reports, “Graduation—gave speech—went fine.” This entry leaves a lot to be desired, like how I felt before, during or after the speech. It doesn’t include any feedback from family members, friends or my girlfriend.

I typed the speech on a personal typewriter. Do you remember typewriters? My speech is double-spaced, but the print is very light in many places, indicating that I used a used ribbon. The font size is too small, in my opinion, for a speech, but I don’t remember being able to change the font size on a typewriter. I used underlines, capital letters and exclamations to show me where I wanted to emphasize a word or thought. I’m sure my speech teacher assisted me in refining this aspect of my delivery.

I used nine questions in the speech to engage my audience, and the speech shows that the primary audience consisted of my 116 classmates. For instance, I began the speech by stating, ‘It is proposed and prophesized by our generation to “do your own thing” and went on to ask, ‘Can you “do your own thing” when you don’t know who, what, and why you are you?’ I also used three different quotations by three different men: Michel Eyquem Montaigne, William Henry Channing and Ralph Waldo Emerson.  So I delivered the short presentation based on research, editing, and typing and practicing it.

I didn’t know in 1970 that I would be called into Christian ministry as a pastor and chaplain, but I kept the graduation speech. When did you become a public speaker? Were you a child, a teen or an adult? Some people will never give a speech. On the other hand there are situations where we’re enlisted for a prepared speech. Two examples are being the father of the bride and the best man in a wedding. Tradition has it that the father will speak to and about his daughter at the reception. The best man is typically expected to give a toast to the newly weds. Below are three practical things you can do in preparation for public speaking once you’ve been enlisted.

Tackle public speaking as a learning experience. We learn about ourselves, our audiences, people in general and how we can make a speech good as possible or make it better the next time we give it. We learn about what works and doesn’t work. We learn about our style of speaking. My graduation speech title was “The Greatest Thing in the World Is to Know How to Be Yourself.” I’ve learned to do that as a speaker. You have to learn to do it too. There is always something more that we can learn to be ourselves and to become a more effective speaker, so take or make opportunities to speak.

Tag people to help you be a better speaker. My speech teacher assisted me before I gave my graduation speech.  Becoming a better speaker requires the commitment to let others assist us in developing our speaking skills. This includes sharing speech ideas with others, talking about the purpose of the speech, letting someone evaluate the draft, and even practicing the speech in front of others before the event. I practiced my graduation speech with my teacher at the gymnasium where I was going to give the speech. Find friendly people to help you improve your speaking skills.