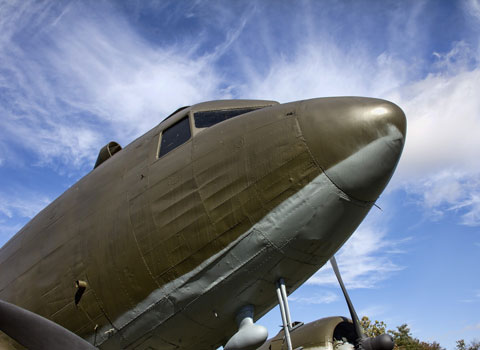 Back office and front office team work is essential for success. ‘Front office’ lingo is about those who meet the client or customer as a primary component of their job description. The ‘back office’ personnel are those who provide the resources or services for the front office to achieve their objectives. Transferring this concept to World War II, I find this kind of team work illustrated in the role my father had in transporting planes in 1943-1944. I dedicate this article to those who served in the air in the war, grateful for their service even though the large majority of them, including my father, have heard the last notes of the bugle playing taps. I hope that by reading this article you’ll dig for more information about your ancestor or family member so that you can better understand their back or front office role in that great endeavor and, more fully, appreciate your back office role.

My Dad piloted or co-piloted B-17s, B-24s, A-20s, and P-70s to various destinations in the U.S., Scotland, Italy and India. I possess his two and a half inch thick binder of documents containing the Operations Orders for the transport of each plane. An Operations Order contains the date, description of the mission, starting point and destination, crew members’ names, rank, serial number and role. When Dad completed his four-engine plane training at Hendricks Field in Sebring, Florida in 1943, he was assigned to the 4thFerrying Group, 26thSquadron in Memphis, Tennessee. His final transport was flying a new C-87 to Tezpur, India in September and October 1944. He remained there to fly sixty-six round trips over the Hump, the Himalayan mountains, transporting supplies, fuel, and personnel to and from China in the war against Japan.

I will give you a brief historical summary of two B-17s and introduce you to one of the crew members. The first plane, a B-17F (42-30779)[1], was delivered to Prestwick, Scotland in September 1943. It joined the 306thBombing  Group (BG), 369thBombing Squadron (BS). It was shot down by a rocket from a German fighter on October 14, 1943.[2]Seven crew members survived and became prisoners of war (POW), including the pilot 1LT Willard H. Lockyear. The other crew members were: 1LT Craig S. Powell, co-pilot, killed in action (KIA); 2LT Paul N. Welton, navigator, KIA;  1LT Albert J. Nagy, bombardier, POW;  SSGT Lester Kurk, tail gunner, POW;  SSGT John Regan, left waist gunner, POW; SSGT Don Rich, top turret gunner/ flight engineer, POW; SSGT Bernie Swift, radio operator, POW; SGT Earnest J. Gilbert, right waist gunner, POW; SGT Alfred Weiland, ball turret gunner, KIA. Pilot LT. Willard H. Lockyear was born in 1918 in Kansas, enlisted in 1940. He had flown 17 missions when his plane was shot down. He was a POW at Stalag 7A in Moosburg,[3]Bavaria and at a couple of work camps.[4]His enlistment card, marriage information, and various residences can be accessed on Ancestry.com. He died June 18, 1999.

The second plane was a B-17G (42-38089). The Operations Order dated January 13, 1944 states that the plane would be flown to the National Airport in Washington, D.C. where Dad was to release the plane to pilot Colonel Fay R. Upthegrove (1905-1992, West Point, 1927) and co-pilot LT. Colonel Peter H. Remington. Dad kept the document signed by Colonel Upthegrove verifying that he had received the plane. Colonel Upthegrove was the first commander of the 99thBomb Group, from which he had been relieved of command in November 1943 and given command of the 305thBomb Wing in the 15thAir Force in Italy. He and Remington apparently flew the plane to Italy. About six months later with a combat crew, it was reported missing in action June 16, 1944 near Vienna. No parachutes were seen and it crashed.[5]  Upthegrove distinguished himself in several other command positions after the war as he rose to the rank of Major General before retiring in 1957.[6]

Here are three closing observations on back office and front office team work:

First, take pride in your back office role. Dad had a ‘back office’ role in transporting planes. He didn’t see combat, but he was living his dream of flying anyway. His role was extremely important, like those in farming, manufacturing, training soldiers and pilots, citizens rationing food and supplies or buying war bonds. Those on the front line in the air needed replacement planes and Dad helped deliver them to the front line. Back office personnel contribute an indispensable element to organizational success.

Periodically, remember the BIG picture of your back office job. It’s essential for the front office or front line to succeed. When I served as the chaplain at First Rate, Inc. I periodically reminded a team member that our software and supporting services helped our clients succeed in managing their clients’ assets by providing the best investment performance data upon which their clients would make financial decisions. The back office is essential to wise decisions in the front office or on the front line.

Finally, it’s a new day and we’ve got a mission to fulfill. The men flying the B-17s in combat lost a host of crew members in the air, yet they got up again, put on their flight gear and flew into the wild blue yonder on another mission to subdue the enemy. My Dad did it flying the Hump in some of the worst, if not the worst, weather imaginable. Frightened? Yes. Committed? Yes. Helping in a worthy cause? Yes. As back and front office team members work together, pray for strength to suit up again today “in the power of God”(2 Corinthians 6:7)[7]for today’s duties.

[1]The letter ‘F’ refers to series of the B-17 ; ‘42’ refers to the year made; the five digit number is a number within a production block of planes. http://www.joebaugher.com/usaf_serials/usafserials.html

[7]The context of this quote is a description of the Apostle Paul’s integrity and perseverance in the midst numerous struggles and hardships.